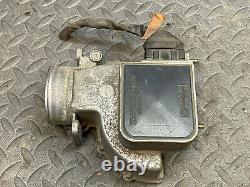 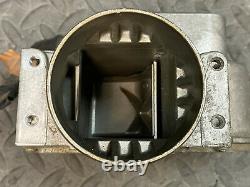 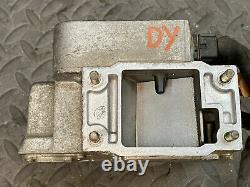 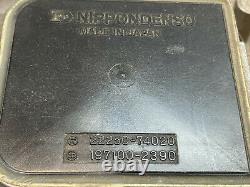 Toyota 2SE Mass Air Flow Sensor in GOOD working order. WATCH VIDEO below showing this sensor hooked up and running just fine in my 1986 22RE 4Runner. Works just fine in ALL 1983 to 1995 22RE vehicles.

You maybe wondering why so many different part numbers if they all work and perform the same? Well part numbers often are set for a specific engine model, Production time period and simply due to a bracket that is attached to it even though the sensor its self functions exactly the same with the same signal the ECU needs. They are all the same physical size and flow the same CFM of air through them. I have been driving various 22RE power vehicles for nearly 30 years and learned a LONG time ago that most of these 1980s and early to mid 1990s air flow sensors all work exactly the same and perform exactly the same.

The exception being the 1987 to 1991 Camry 3SFE air flow sensors and 1988 to 1995 3VZE V6 truck & 4Runner air flow sensors. Those two sensors are the same physical size and all as the 22RE sensors, but the 22RE engine will only start and idle barley with a check engine light coming on immediately on start up.

3SFE & 3VZE sensors are clearly wired differently and it is obvious since they are missing one pin connection in the plug socket. They are only using 6 of the 7 pins in the plug. The 22RE / 4AGE / 2SE / 3YE and 4YE Air Flow sensors use all 7 pins in the plug connector.

YES, all the 22RE, 2SE. 3YE and 4YE Air flows sensors do work and swap just fine between each other. The only swap I have never tried was a 3SFE Camry sensor in a V6 3VZE Truck or 4Runner or vice versa.

Those sensor look identical, same physical size and both are missing the same wire to the same connection that I mentioned the issue the 22RE engine had when I tried either one on a 22RE engine. My assumption is it is a very good chance the 87-91 Camry 3SFE Air Flow senors do work on the 3VZE V6 Trucks and 4Runners or the other way around. I have never owned vehicles with either of those engines so never had a reason to try swapping them around. Some remote or far off locations can take an extra day or two. If you have recently moved or are temporarily away and need an item delivered to an alternate address.

You MUST update this address in your account first before checking out! I might be able to fix the issue. Especially if its my fault to begin with. Mistakes do happen once in a while.

Understand that "Used" auto parts will have signs of use and normal wear and tear. If an oversight slips by, Please let me know. Unless I specify an item is in "Perfect shape" or "Mint Condition" please assume there will be blemishes or signs of use.

Anything that has damage or needs attention will be noted or pictured. Toyota Camry 2SE Air Flow Sensor Tested in 1986 22RE 4Runner. The item "83-88 Toyota Truck 4Runner Camry 22RE 2SE Mass Air Flow Sensor Meter WATCH VIDEO" is in sale since Wednesday, December 2, 2020.

This item is in the category "eBay Motors\Parts & Accessories\Car & Truck Parts\Air Intake & Fuel Delivery\Sensors". The seller is "mmccul3797" and is located in Aurora, Colorado. This item can be shipped worldwide.